How do women live out spiritual motherhood? Filling in for Dr. Gray, Dr. Ben Akers welcomes Sister Maris Stella of the Sisters of Life to answer this question. Sister Maris Stella is a recent graduate of the Augustine Institute Graduate School of Theology and serves in Denver, Colorado. Before entering religious life, she served in the United States Navy. Watch on Tuesday to learn about her story and her vocation as a spiritual mother! 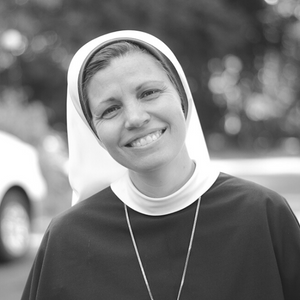 Early in her childhood, Sister Maris Stella dedicated herself to Jesus through Mary. She felt an invitation to religious life in just the second grade after her first communion.

After high school, Sister Maris Stella joined the US Naval Academy. She desired to do something purposeful with her life. She would think about religious life from time to time, but a decision seemed far in the future because of the commitment she made to serve five years after graduation.

After graduation from the academy, she was sent to California to serve as the gunnery officer onboard a destroyer. Their ship spent hundreds of nights out to sea off the coast of South America chasing drug traffickers. While she was at sea, she came to know God in the beauty of His creation and through the men and women with whom she served. Later she was assigned to be the Catholic Lay Leader on my ship because they did not have a chaplain. She was asked to bring the Eucharist on board so we could have a service each Sunday. Through her world travel and experiencing the beauty of both vocations, she realized Jesus was calling her to have an undivided heart.

Sister Maris Stella entered the Sisters of Life in 2006, and in 2015, she moved to Denver to help start a new convent. The Sisters of Life in Denver walk with many college-aged women in spiritual accompaniment as well as vulnerable women who have had or are considering an abortion.